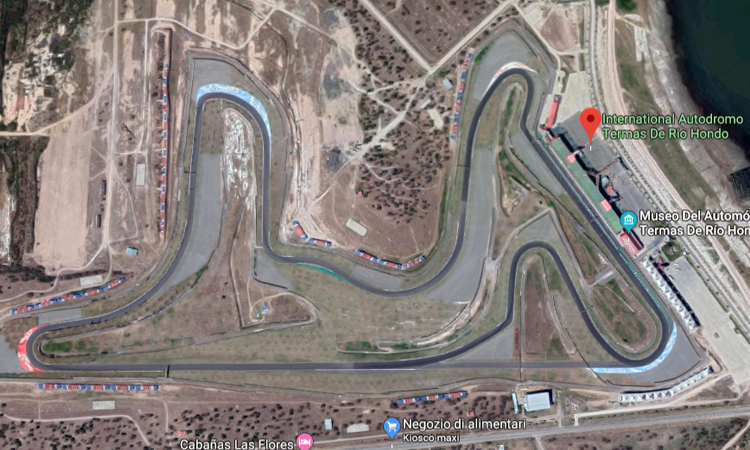 The Termas de Rio Hondo racetrack is located 6 km from the city of Rio Hondo, in the province of Santiago del Estero, Argentina.
The route extends over an area of 150 hectares. The Italian architect Jarno Zaffelli designed some changes in 2012, which involved the reduction of the length of the main straight and an increase in the number of curves, brought to 14.

The circuit is well suited to the powerful MotoGP bikes, which I can unleash all their horses on the 1,076-meter straight.

Since 2014, the World Championship has made a stop at Termas de Rio Hondo.

At the end of the straight we have turn 5, a 180 ° bend to the right that requires the most demanding braking of the track: it decelerates from 325 km / h to 75 km / h in 320 meters. The following curve is 6, a fast left acceleration, which leads to the entrance to the second sector. Turns 7 and 8 are two right turns in quick succession that must be covered as a single turn.

Curve 9 is a left of about 120 km / h that comes at the end of a small straight and introduces the most demanding stretch of the track. In fact, the 10 on the left, which marks the beginning of the last sector, is a blind curve with a small crest, at the end of which there is a change of direction, necessary to face the curve 11. This is a rather long left curve which leads onto the last straight, before the sequence of right-hand corners 12 and 13.

In 13 you enter quite wide so as not to penalize the next and very close left curve 14, which leads to the starting straight. Turn 13 can be interpreted differently and for this reason a lot of overtaking occurs at its entrance.