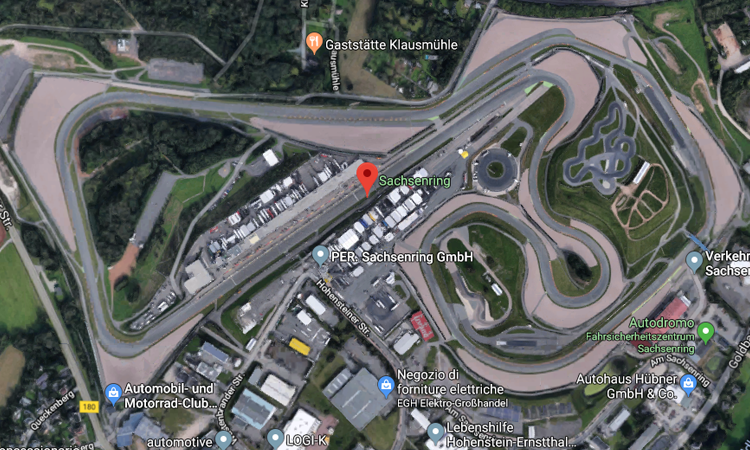 The Sachsenring circuit is located about ten kilometers from the German town of Chemnitz. In the early twentieth century, various car and motorcycle races were held in the streets around this town and in 1996 the growing desire to improve the safety conditions of the competitions led to the construction of the Sachsenring track.

Various changes have been made from the original track and in 2001 there was a radical change in the track design, with the construction of permanent boxes and the creation of the very steep downhill straight that leads to the Sachsenkurve.

It is one of the slowest tracks in the championship and although not characterized by large braking sections, the braking system reaches quite high temperatures, due to the lack of straight sections, in which the system itself is cooled.

The straight of the finish line built on a rather important bump, has a length of about 700 meters and takes us to curve 1, the Coca-Cola curve, a very narrow 180 ° with the entrance uphill. Here a rather demanding braking takes place, in fact from 285 km / h the drivers decelerate by about 200 km / h in 249 meters. At the exit of curve 1, uphill, you make the change of direction that leads to curve 2, a left not very narrow, at the exit of which you have the beginning of the second sector of the track.

When exiting turn 2, modulating the throttle, a quick change of direction is made, which allows us to tackle turn 3, a right to go at a constant and rather low speed, which has a layout that recalls the Greek capital letter Omega. Leaving the endless curve 3, uphill we face the change of direction, which takes us to three left curves: curve 4, curve 5 and curve 6. These curves must be suitably connected, almost as if it were a single turn to constant radius, with a travel speed slightly higher than that necessary to tackle Turn 3.

Turn 6, the Sternquell is downhill and leads to a short straight section that the bikes face anyway in the bend, to prepare for the nearby turn 7, a left with a rather large radius always downhill, at the end of which the third sector begins of the runway.
This is followed by another short straight section to be tackled again while bending and accelerating, which leads us to another curve to the left, curve 8. At the exit from 8 we accelerate for a few seconds and then, choking the gas we face curve 9, a left in support that leads us to the small detached, with which we face the entrance of the 10, the last left of a sequence of seven left curves.

At the exit, a quick change of direction leads us to the most demanding curve of the track, the Waterfall curve 11 which is very fast and has a blind entrance. The bikes have been bent to the left for a long time, so the right side of the tire is quite cold and must quickly regain the temperature that guarantees the right grip.

At the exit of turn 11, named after the late German champion Ralph Waldmann, we have a straight where there is a 13% change in elevation. At the end of this section you face the curve 12 the Sachsenkurve, a left where the most demanding braking of the track takes place.

Another straight section from turn 12 leads us to the last bend of the track, 13 also known as Queckenberg Kurve, which is uphill with a gradient of about 10%.