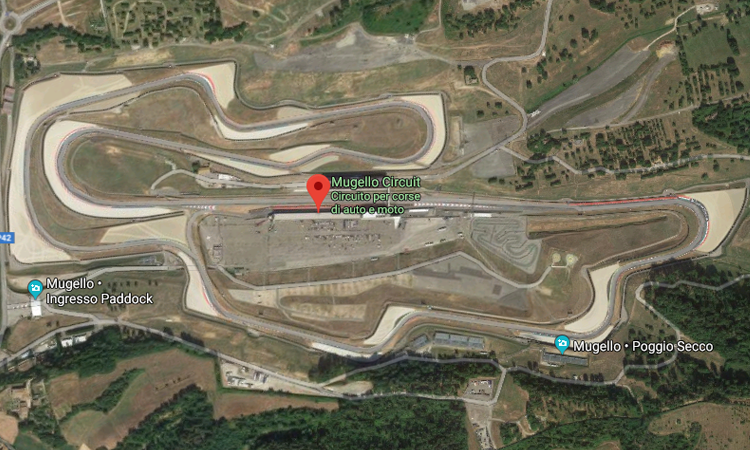 The Mugello Circuit has been owned by Ferrari since 1988, which has made many investments, making it one of the most advanced circuits in the world. It is located in the beautiful Tuscan countryside about 30 km northeast of Florence and is 5,524 m long.

The route follows the natural altitude of the valley in which it is located and this means that along the route you can encounter numerous variations in slope, with very fast sections alternating with slower and more technical ones.

All of this also makes it one of the most complex circuits in the world and for this very reason, many teams test there during the motorsport season.

In 1976 the first GP took place on this circuit, which since 1991 has continuously hosted the world championship circus.

The long straight of 1141, the second longest in the world championship, allows the MotoGP bikes to reach speeds close to 355 km / h. The first sector begins with the second half of the straight, at the end of which we have the Curva San Donato, which is reached after a slight bump. Here the most demanding braking of the entire track is carried out, as it goes from 355 km / h to about 90 km / h in 288 meters.

The slightly parabolic curve and the slowest of the track is uphill and leads to the first change of direction of the Luco-Poggio Secco. The Luco is a fast left, while the Poggio Secco is a right that represents the highest point of the track. From here starts the straight with a slight brow that marks the beginning of the second sector and that leads to the second change of direction, the Materassi-Borgo San Lorenzo, a left-right to be covered at about 130 km / h. At the Borgo San Lorenzo exit, the descent that leads to Casanova-Savelli begins, a quick change of direction right-left, which runs at about 160 km / h.

It is one of the most complex sections of the circuit, also because the Savelli is in counter-slope. Here begins the third sector and without a moment’s respite you reach the next corner, which represents the lowest point of the circuit, the Arrabbiata 1. Arrabbiata 1 and Arrabbiata 2 are two very fast right-handers that must be covered as a single curve slightly parabolic, with variable radius and height. Arrabbiata 2 is uphill and leads the Scarperia-Palagio to the fourth S of the circuit, a fairly wide downhill right-left.

From here a straight stretch with a rather pronounced crest leads to the Correntaio, a downhill hairpin with a high degree of difficulty. In fact, it is a wide-radius curve, whose exit marks the beginning of the last sector. Here we have the latest variant, Biondetti 1 and Biondetti 2 which are tackled at around 180 km / h and in full acceleration we go towards the last corner of the circuit.

La Bucine is a bend from 180 ° to the left downhill, slightly parabolic that can be traveled with various trajectories, paying attention to the exit speed, as it will be crucial to reach maximum speed on the straight.