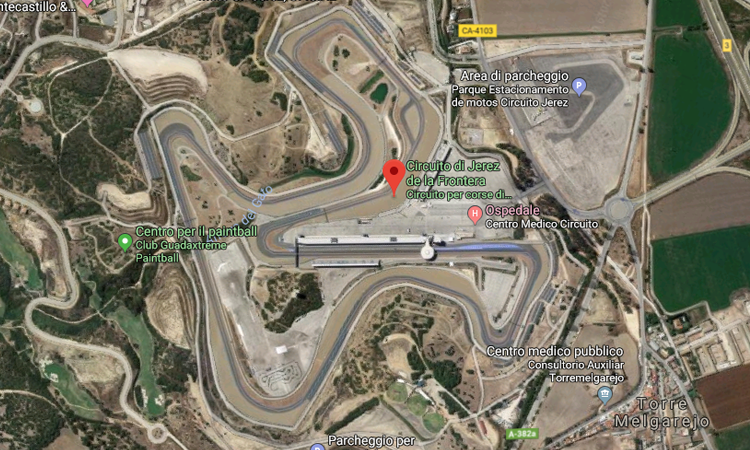 The Jerez circuit was built in 1986 and hosted its first Grand Prix the following year. For years now it has represented the first European circuit since the start of the championship. The circuit has a length of 4423 meters with 5 corners on the left and 8 on the right. Optimal weather conditions make it the ideal location for testing during the year.

The starting straight is very short and the riders are immediately faced with the first braking section, which in 200 meters allows to decelerate from about 280 km/h up to 100 km/h, to face the first right corner, Expo 92. After a small straight stretch we have turn 2 (Michelin curve) on the right by almost 180° where the pilots go from 190 km/h to 85 km/h in the space of 130 meters.
Immediately at the exit of turn 2 you have to set turn 3, from which in acceleration, after a short straight stretch, you go through fast turn 4 to the left, at the end of which the second sector begins.

Curve 5 (Sito Pons curve) is a curve to the right of about 150 km/h, which takes us to the longest straight stretch of the track, slightly downhill. Here begins the third sector. It decelerates in 241 meters going from 290 km/h up to about 90 km/h. It is the second most demanding braking section on the circuit, with a deceleration of 1.6 g. The difficulty of the braking means that it is the point where the greatest overtaking attempts take place. The next turn 7 is a left to be covered in acceleration up to 8 (Aspar curve), a right with a wide radius to be covered at about 160 km/h. A short straight leads to curves 9 and 10 (Nieto curve and Peluqui curve respectively), two right curves to be connected in order to travel them as a single curve.

At the entrance of curve 10 the last sector begins. The exit speed from Peluqui is fundamental, in order to face the next two left-hand turns, turn 11 (Criville curve) and turn 12 (Ferrari curve) with the right trajectory and speed. In fact, this is a very fast and technical section of the circuit, given that the two curves are covered at around 200 km/h. Finally, we have curve 13 (Lorenzo curve), one of the most famous braking sections of the entire world championship circus, the scene of many historic overtaking, where in about 200 meters we go from 250 km/h to 75 km/h.