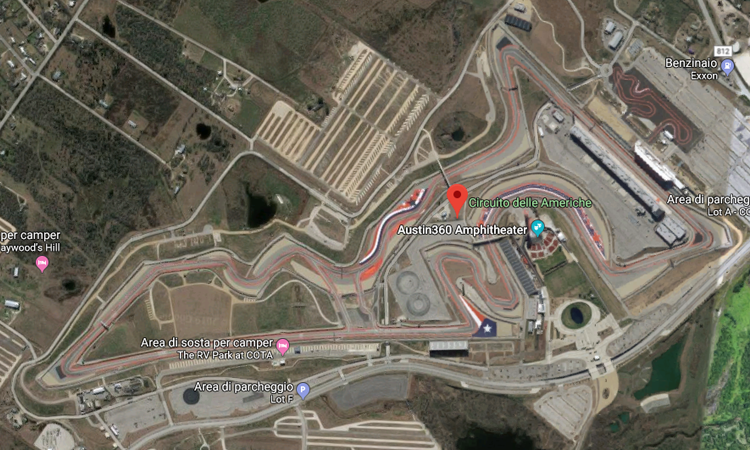 Circuit Of The Americas – United States

The Circuit of The America is a track that was designed inspired by various curves of the most beautiful tracks in the world. It is 5513 meters long and has 11 left and 9 right turns. It was designed by the famous German architect Hermann Tilke. CoTA entered the MotoGP calendar in 2013.

The Texan track is distinguished by the climb of 41 meters in altitude which is located on the starting straight. At the end of this climb we have the first corner of the track, a rather narrow left, at the entrance of which the drivers slow down from 312 km / h up to about 65 km / h. By mistaking the detached point you end up wide, clearly penalizing the entrance of turn 2, a downhill right that leads into a small straight stretch. Then we have the most spectacular sequence of curves on the circuit: a left-right-left-right (3-4-5-6 respectively) in rapid succession, then again a wider right that leads to the end of the first sector.
Making a mistake even just one of these curves is very penalizing, as the rapid succession with which they follow one another, does not give the possibility to quickly resume the rhythm.

Then we have turn 7, 8 and 9, respectively a left, a right and a left in rapid succession and uphill. Curve 9 is quite complex in that it is located at a slight neckline which prevents you from seeing exactly the point of the rope. From here begins a small straight that leads to 10, a left to face at full throttle passing on the curb, in order to have the best thrust, to face the downhill straight that leads to 11, a hairpin from almost 180 °. Here takes place a rather heavy braking where in 200 meters it goes from 280 km / h to 60 km / h.

The second sector ends at the beginning of the very long 1200m false-flat straight, at the end of which we have turn 12 where the bikes slow down from 360 km / h up to 75 km / h in 340 meters. This braking represents the greatest deceleration of the entire World Cup and is equal to 1.5 g. A short straight stretch leads to the two right 13 and 14, to be covered almost as a single curve. The last sector starts at the end of turn 15, a 180 ° left. The 16, 17 and 18 that follow are three slightly downhill right curves, to be connected and covered as a single curve. The track ends with turns 19 and 20, two left by approximately 90 ° interspersed with a short straight.