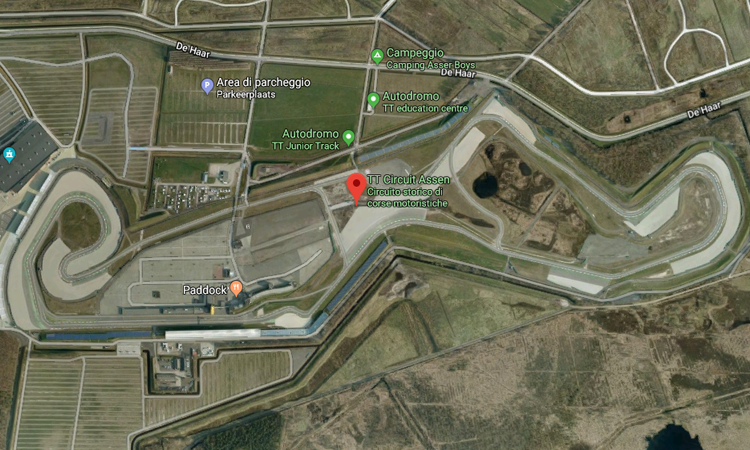 The TT Circuit, also known as the two-wheeled university, was inaugurated in 1949 and before the track opened, the races were held on roads open to the public. To commemorate these road races, the race of the world championship, which has been held continuously since the inauguration of the circuit, is called the Tourist Trophy, just like the famous race that is held on the roads of the Isle of Man.

Another curiosity is that until 2015 the race for religious reasons was brought forward to Saturday. This track is for almost the exclusive use of two wheels, so its design was made according to this use.

The circuit has undergone many changes, which have seen a progressive reduction in the length of the track, which currently measures 4555 meters with a straight of 970 m .. The last important modification was made in 2006, following which the track was reduced by about 1500 meters in the initial part. The very fast section characterized by very technical curves has been replaced by a series of very slow curves, which have distorted the legendary configuration.

The intervention was necessary to build more capacious stands, parking lots and various infrastructures. This is the price of progress! The track, however, even after this modification has retained its charm also because the remaining stretch is characterized by rather fast corners.

The finish straight leads to the Haarbocht a slightly downhill right-hand bend where the most decisive braking of the entire track takes place. In fact, the drivers reach 285 km / h and brake for about 219 meters with a deceleration of about 170 km / h. At the exit of turn 1 a small straight leads us up to turn 2, the Madijk a slight curve to the right. At the next turn 3, the Ossebroeken, you get there after another straight section. It is a right that precedes another right at 4. The two curves must be suitably connected and together exceed 180 °.

Immediately at the exit we have the Strubben hairpin which represents the first left of the track. You have to pay the utmost attention in the first lap, just to avoid that the tire still not at the right temperature, could have sudden loss of grip. Here we have the first chance to overtake, with a tighter line and a delayed braking. At the exit the gas opens wide and the trajectory that has been set in the hairpin will be decisive for reaching a good speed on the long straight, which marks the end of the first sector.

After this straight section we have the Ruskenhoek, a fast right where you can try to overcome. In fact, if you keep to the outside when you exit, you can then have an advantage, in tackling the next curve 7 on the left.

A small straight follows along which ends the second sector, straight that leads us to a right from 90 °, the Stekkenwal. A slightly longer straight brings us to the De Bult a 90 ° left, where we face a decisive detached. At the exit, a short straight section takes us to Mandeveen, a right that must be connected to the next right, curve 11 Duikersloot, at the exit of which the third sector ends.

At the exit without a moment’s respite we face curve 15, de Ramshoek a blind bend to the left, which leads to the chicane before the finish. This change of direction left-right, called Geert Timer Bocht, has been the scene of many overtaking over the years.